Lee was raised in Washington state, completed his MFA degree at Stanford University, studied with Nathan Oliveira and Frank Lobdell.

The Rocks in Water series began from a memory of inner necessity, which were the camping trips taken on the Olympic Peninsula in Washington State, where I first saw haystack rocks along the coast. This series began the visually centered and active images that evolved into the Threshold Emblems.

The Windows series began with my photos of Bodie, the CA ghost town in the Sierra Nevada Mountains. In my monotypes and paintings, I intuitively explored structure and color as light, how unequal balance could be found in the “golden rectangle.” This series began the start of purely formal visual concerns and dualities.

The Mythos painting and drawing series began while living and working with Linda in a warehouse near the train tracks in San Mateo. They represent my feelings for the figure in mythological art history and for my new partner. They gradually evolved into the Acrobat Series about the human comedy and then more recently, began from newspaper references, the human tragedy of the Enigma figures series.

Personally, the Acrobats series has come to embody the life force found in Nature; the artist’s relation to society; humanity in relation to a higher perfection — all leaping with questions about mortality and transformation. The lyrical response of grace and agility to adversity and change acts as a metaphor of the creative process.

The Twenty Books series resulted from working in 20 books for two years, in the mornings as a quick warm-up of brush strokes and washes. The range of books included the History of Japanese painting, children’s books, ledgers of numbers, foreign languages and geometry textbooks. After working with brushes and ink, the next step was to liberate the pages from their bindings, and collage-mount them 4-square on Rives paper.

The Threshold Emblems series relate to the sacred geometry of Greek Thought. Often the Circles, Triangles, Grids, and Keys come to the studio as discarded objects or children’s toys. They become metaphors for centered systems returning to elusive universals, and for using Abstraction as personal research.

The series of print Improvisations evolved out of my collection of found-object plates and blocks, which are printed by hand and with an etching press. The unexpected sources and unplanned process of these prints are a continual surprise and challenge.

The Spirit Birds series started, again from a memory of inner necessity, when at an early age I saw birds as spirit forms from Nature, and I continue to see them that way. This series is in contrast to the Enigma figures that continually struggle to be alive and free, to determine why they are an enigma. The moon is their witness and the dividing line is their conscience, or vice versa. 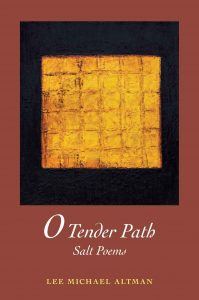 It is a philosophical meditation on life, its vicissitudes and unanswerable questions. He complements his writing with his own artwork that has an existential-humanistic influence originating in Bay Area figurative painting. His book explores the metaphor of Salt as having a “from the earth” association mixed with several meanings, that attempt an understanding of self-liberation through being in nature. He is a Stanford graduate in the Fine Arts. (22 artworks plus cover art).

Books are available at brick-and-mortar bookstores as bookshopbenicia.com or various bookseller
websites as amazon.com/author/leealtman It is about growing up in the Pacific Northwest and then visiting other places in the U.S., Mexico and Europe. A common thread throughout the book is nature mysticism combined with a deep feeling for
humanity and how such combinations have resulted in his spectral poetry and understanding of the world. His cover art and 16 illustrations evoke his poetic themes.

Books are available at brick-and-mortar bookstores as bookshopbenicia.com or various bookseller
websites as amazon.com/author/leealtman

Desuyo project: Artists respond to the question “Why Make Art?” alongside their artwork and portraits by photographer Hedi. B. Desuyo
www.hedibdesuyo.com
www.blurb.com/search/site_search?search=Why+Make+Art+by+Desuyo&filter=bookstore

Color, form and images are much like words to him that convey poetry and content. One engages that talented multi-level mind, and visual art is not reduced to a simple art metaphor.
–– Nathan Oliveira

Altman’s artwork is not the mimesis of the given world but of its becoming, which is to say also the world in us that he has always
gone after.
–– Jeffrey Gray    Read Full Letter

Whenever I see his studio walls splashed with these ideas, shapes, and lines, I always remember both the skills and accidental fortunes of that iconic acrobat. Jump!!!  …  Somersaulting from antiquity across to the new poetry, Lee Altman is forever looking and reading his texts for those sudden surprises. Whether he is accessing etymology in the Oxford dictionary or just perusing a child’s tale, Altman remains a literary artist, sourcing his imagery in the contemporary mixtures of our time.
–– Richard Shaffer    Read Full Letter